While I was working on barcode recognition software, I suddenly realized that in many barcode symbologies, the Luhn algorithm is used for check digit creation or verification. In the barcode context it is often called “mod 10 checksum”. There is a very nice article http://en.wikipedia.org/wiki/Luhn_algorithm on Wikipedia explaining the algorithm. Another particularly nice article written by Oz can be found at http://nextbit.blogspot.com/2007/06/doing-luhn-checksum-simply.html. I have taken his code and ported it to C++.

I had a short look into the U.S. patent 2950048 that Hans Peter Luhn has filed in 1954. I have not read I fully, but it appears that he invented a mechanical computer – he called it handheld then – to check whether a number had the correct check digit. 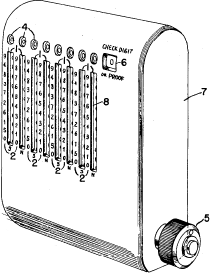 Here is a step by step description of how the Luhn algorithm works.

And here is the code that verifies if a number has a correct check digit according to the Luhn formula.