A vision system developed by Impuls Bildanalyse GmbH for the Paul Scherrer Institute helps to improve the safety of the MEGAPIE liquid metal target for neutron production (spallation source).

With this type of set-up, an improper intensity distribution of the incident proton beam can damage the liquid metal container inside the target as well as the safety hull around the target. It is therefore important to timely switch off the proton beam, should an improper beam-condition occur. 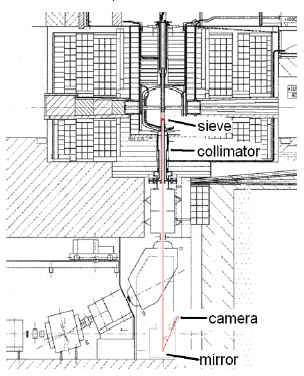 To address this scenario, Impuls Bildanalyse GmbH in close collaboration with PSI has developed the VIMOS vision software. The VIMOS software constantly monitors the distribution of the incident beam in realtime. The beam heats a tungsten mesh and the glowing of the mesh is acquired with a fast radiation resistant camera. When the beam distribution is detected to be out of specification for a few video frames the system causes an alarm. In consequence, the proton beam is switched off, which avoids subsequent damage to the target.

The following picture shows a VIMOS video frame recorded when alarms were triggered due to an inadvertent non-correct setting of some magnets and quadrupoles which led to an increase in beam density on the target by a factor of 3.5.

The system is in use since 2004 and works perfectly since then.